COLUMBIAN ACADEMY.
ABOUT 1790, by virtue of an act of incorporation, "The Trustees of the Bergen Columbian Academy" took possession of the school lot, and erected thereon the building that in those days attained great prominence. It was a noted institution, and many prominent men of bygone days received instruction within its walls.

Agreeably to an advertisement of the `Trustees of the Bergen Academy,' New Jersey, in April last, the grammar school was opened the first of May, and so continues. The pleasant and healthy situation of the place, its proximity to New York, and the low rate at which board may be had, are advantages meriting the attention of the public, especially the people of New York, who may be assured, that the best care and attention will be given to the education and morals of the children, by the teacher, Elijah Rosegrant. N. B. -- The price of boarding, is from twenty to twenty-five shillings per year. The distance of the Academy from Paulus Hook ferry is one and one-half miles only.

Owing to a change of conditions and government, after considerable controversy,

The Trustees of Columbian Academy conveyed all right, title and interest in the property, to the Freeholders of the Town of Bergen, for the continuance of said free school, and for no other purpose.

This was confirmed by the legislature, January 27, 1814, and in after years the property passed under the state school law to the trustees of School No. 1 of the town of Bergen, when the present building was erected. At the time of the consolidation of Jersey City it became a part of the city's school system.

The Columbian Academy was a large, substantial stone building, two stories in height, surmounted by a cupola, on which, after the demolition of the old church in 1841, was placed the weather vane that formerly swung from its lofty spire. The school was conducted on the special grading system, such as is claimed by some of our modern educators as being their own peculiar production, the ground work of which was simply that individuality was recognized, and ability and application encouraged. The whole second story of the building was devoted to educational purposes, with the exception of a square room on the northwest corner, which was occupied by the " Ancient Order of Rechabites," whose mysterious rites kept alive among the scholars a degree of curiosity that was never satisfied.

The initiation services of this order were especially the subject of conjecture; and "riding the goat" being part of the ceremony, a great desire was manifested to see this notorious animal. Holes were bored through the door during the daytime, in order to get a peep at the uncanny beast; but beyond a faint rustling, no evidence was ever secured. He was said to be of the razor-backed, high-stepping variety, and it was supposed that the victim suffered untold tortures during the ceremony.

This room changed the form of the school-room from an oblong into an L-shape, a fact that was taken advantage of by the discreet schoolmaster, to place the girls at one extremity and the boys at the other, with his desk in the angle, so as to afford him general supervision over all. This arrangement was convenient for the punishment of any refractory or disobedient pupil, who was placed between two of the opposite sex, there to remain until the fault had been sufficiently atoned for; this proceeding was always resented by the boys, but when the process was reversed, it was received by the girls with a due amount of commendable resignation. It is curious to note how often it became necessary to subject them to this punishment.

As there were no janitors in those days, the semiweekly cleaning and sweeping of the school-room was performed by two of the larger girls, who were selected for this purpose by the schoolmaster, as a mark of special favor; and one boy was detailed to assist them by carrying water, etc., as a matter of punishment. Under the circumstances, a long time was required to perform this work, and oftentimes the shades of evening were falling before it was satisfactorily completed. On one occasion, the schoolmaster, passing the building about nightfall, noticed an open window, whereupon he determined upon an investigation. He discovered that the sweeping had been finished some hours before, but that the girls had invented a new game which required the most active exertion on the part of the boy to escape being kissed. It is related that the boy was in this instance found in such an exhausted condition, that this department of co-education was forthwith discontinued.

The school-room was furnished with a large stove, which in cold weather was kept red-hot, thus presenting an attractive surface at which to project pieces of rubber, assafoetida or other substances producing pleasant perfumes when burned. In case of extreme cold, the scholars were allowed to surround this stove by details; after one section was well warmed, at least on one side, it was followed by another, somewhat after the manner of relieving guard in a military camp, and as the process continued in an endless succession, the danger of any scholar being frozen to death was avoided.

Long benches without backs were provided for the smaller pupils, while desks with three compartments were furnished for the more advanced scholars. This division of the desk was taken advantage of by the occupants, who fitted a lock on the middle one, ostensibly for the purpose of protecting the luncheons of those who lived at a distance, but principally for hiding contraband articles and forbidden sweets.

Underneath the corner room alluded to was a similar one, in which, according to the fitness of things, a shoemaker located himself, so as to be convenient for covering balls, furnishing whip lashes, or supplying the penny's worth of strap oil, for which the innocent youngster was sent. At a convenient distance, opposite the old parsonage, that stood at the northwest corner of the square, was a large weeping willow, well calculated to hide those naughty boys who, attaching a string to the clapper of the old school bell, concealed themselves within its friendly branches, so that they might, unseen, ring the bell at unseemly hours, and startle the staid inhabitants from their slumbers.

On account of the size of the Columbian Academy and the difficulty of organizing a regular faculty with one head, there were often two distinct schools under its roof. On one occasion, Gasherie DeWitt had charge of the school on the upper floor, while one Gahagen was installed on the lower floor. These were both individual enterprises, independent of each other, with separate and distinct charges for tuition. The rate most frequently charged was $1.50 per quarter. As may be imagined, considerable competition existed between the schools, and when necessary to influence pupils, concessions from the above amount were made. The income of the principals depending upon the number of pupils they might secure, they were very active in their canvassing, and at times rivalled the arts of the practised politician to accomplish their aims. The usual school year in the early days was divided into four quarters of twelve weeks each, with two weeks' holiday in both spring and fall. This was intended to allow proper time and opportunity for replenishing the summer and winter wardrobe. 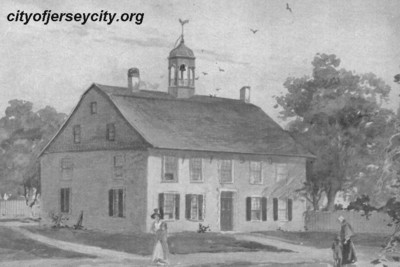